Finance Minister Hon. Janardan Sharma on 12 October chaired the 53rd Joint Governor’s Annual Meeting of the World Bank Group and the IMF of South East Asia Constituency in Washington, D.C., and deliberated on the multiple global economic challenges facing the member countries while stressing the need for scaling up financing to vulnerable countries like Nepal to address their developmental and climate challenges. Minister Sharma also chaired the executive dialogue session of the annual meeting on scaling up financing for climate change mitigation and adaptation where member countries shared their interests and concerns in tackling climate challenges in the region.

On the same day, the Finance Minister and H.E. Samantha Power, Administrator of the USAID held a meeting in Washington D.C. in later’s office and exchanged views on further strengthening bilateral development cooperation between Nepal and the United States. During the meeting, appreciating the longstanding US support in the socio-economic development of Nepal, the Minister stressed on further strengthening the close partnership between the two countries in the priority areas of Nepal’s economic development, including information technology, financing for climate change adaptation and mitigation, investment in green hydrogen and ammonia. He also invited Administrator Samantha Power to visit Nepal at a convenient time.

On the sideline of the annual meeting, Minister Sharma and the Minister of Finance of Thailand H.E. Arkhom Termpittayapaisith held a meeting and exchanged views on promoting bilateral cooperation between the two countries in the areas of tourism, especially cultural tourism to Lumbini, connectivity, trade, and exchanges in education and training, among others.

On 13 October, Hon Sharma held a meeting with Martin Raiser, Vice President of the World Bank for the South Asian region. During the meeting, the two sides reviewed the performance of World Bank-funded projects in Nepal as well as the pipeline projects. Hon Minister, highlighting the importance of climate financing in Nepal, requested the Vice President to prioritize funds for Nepal, particularly in the conservation of the Himalayas, revitalization of the rural economy, and development of river-basin green corridors.

Likewise, Finance Secretary Krishna Hari Pushkar held a separate meeting with Cameron Alford, Vice President, of the Department of Compact Operations of the MCC, and exchanged their views on the timely implementation of MCC compact in Nepal. Jonathan Brooks, Deputy Vice President of Europe, Asia, Pacific, and Latin America and other senior officials of the MCC were also present during the meeting.

In the afternoon of 13 October, Hon Minister interacted with Noble laureate Professor Joseph Stiglitz of Columbia University and other economists of Global Policy Development Centre, Boston University in a round table meeting. The finance ministers of some of the Vulnerable-20 Group of Countries were also among the participants in the round table.

Earlier on 11 October, upon his arrival at the Washington Dulles International Airport, Minister Sharma, and his delegation were received by Ambassador Sridhar Khatri and the Embassy officials. Before departing from Washington, D.C. on 15 October, Hon. Sharma is scheduled to hold more meetings with representatives from other countries and senior officials of the World Bank and the IMF. 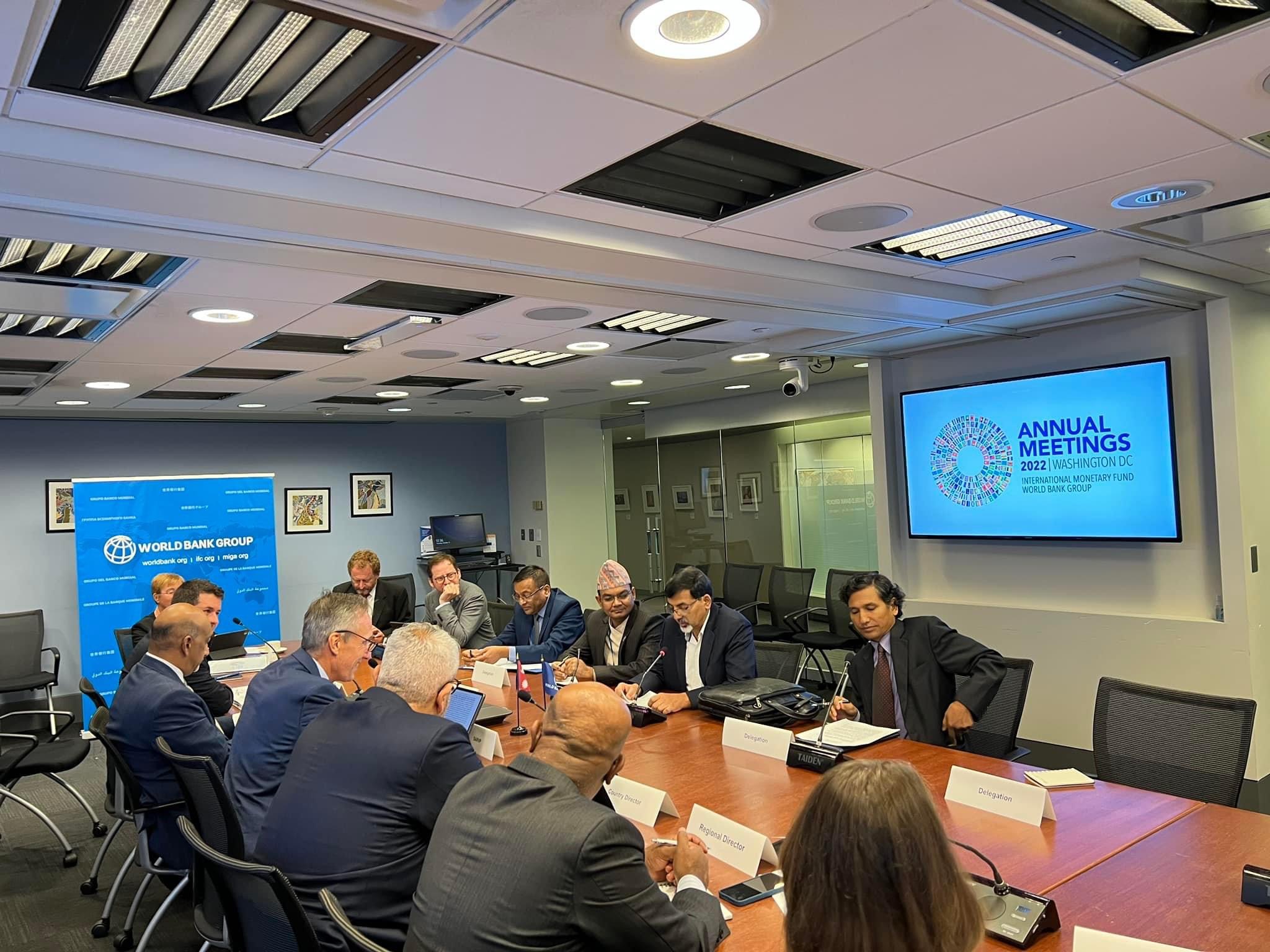 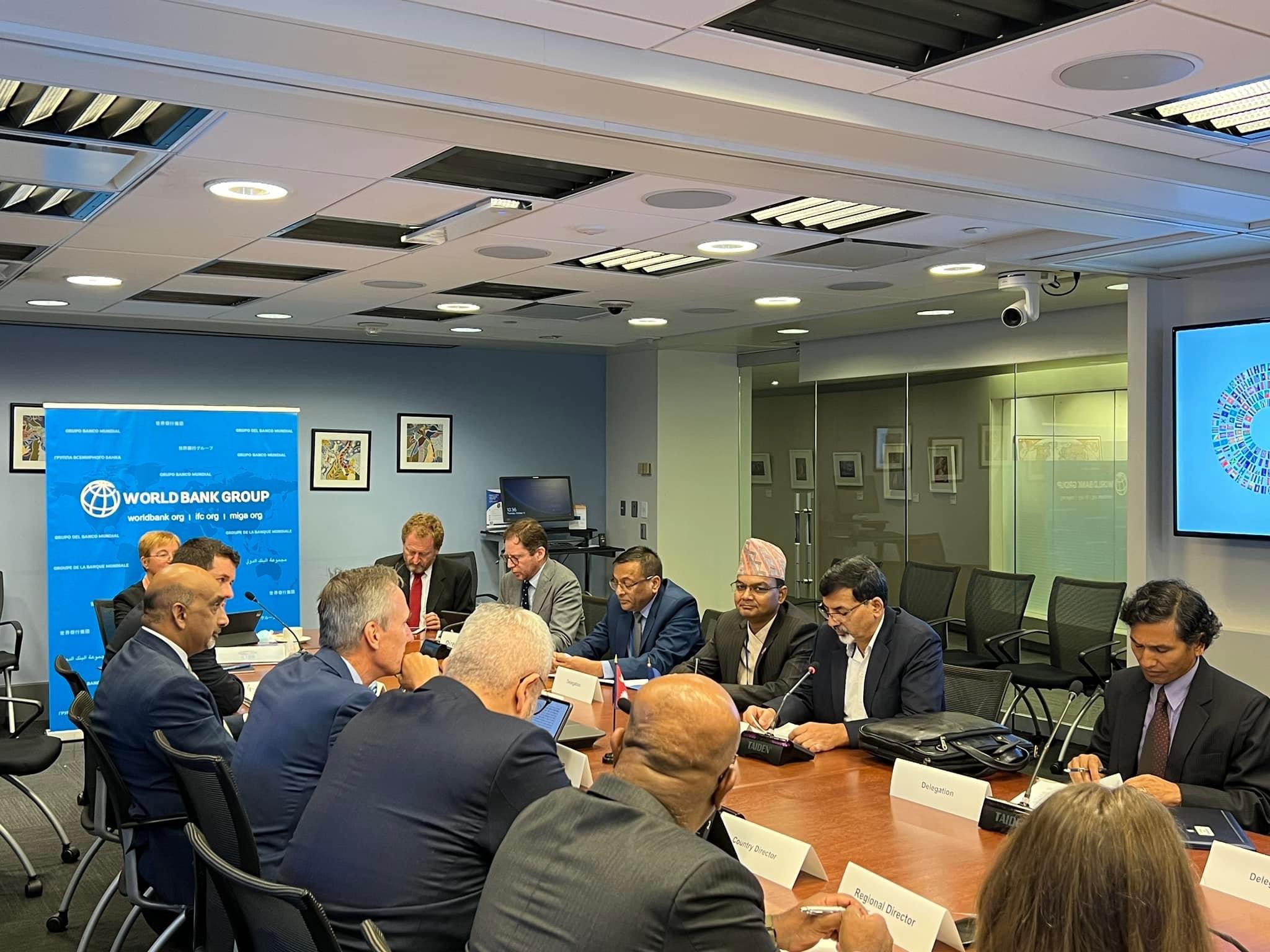 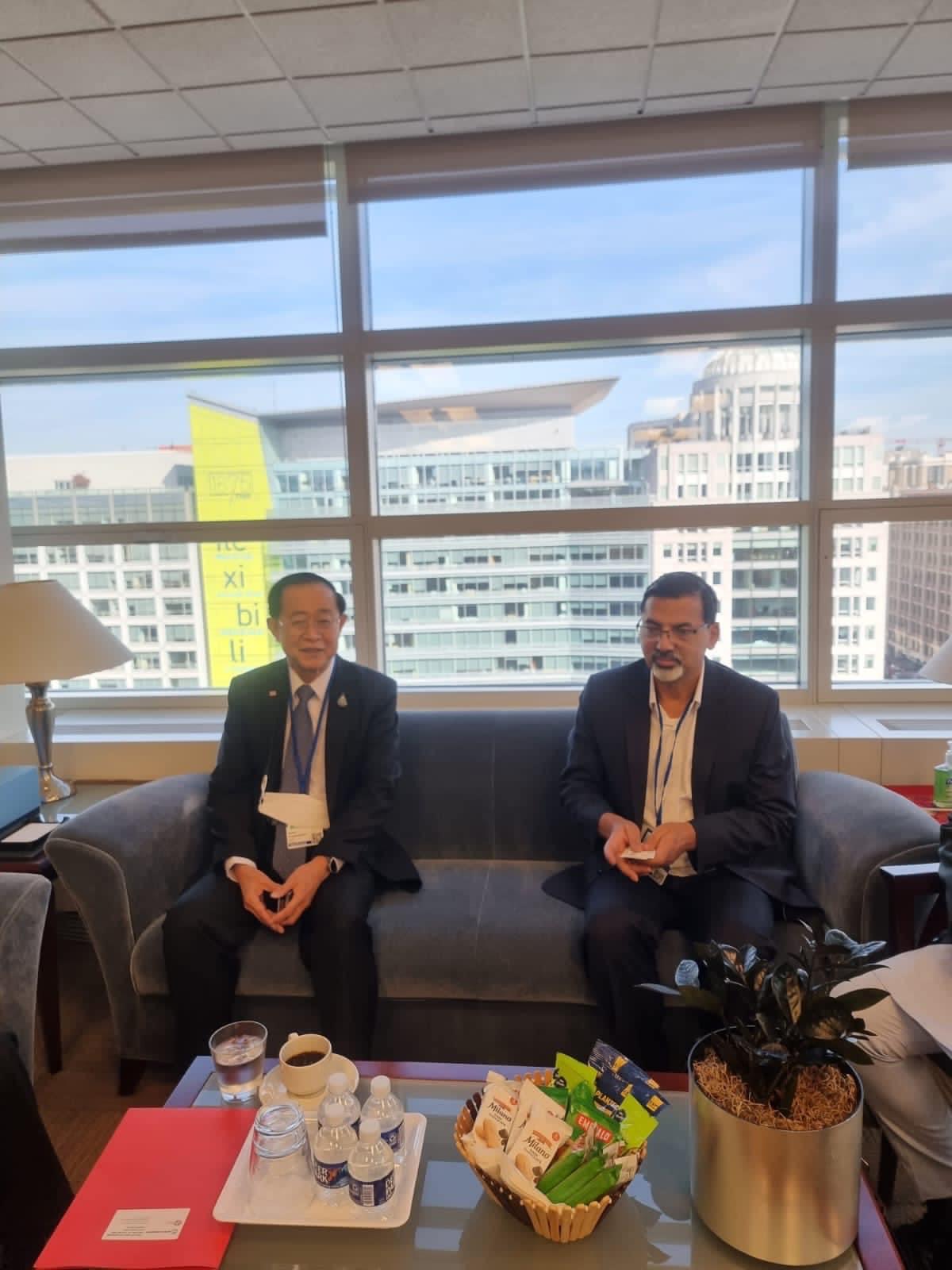 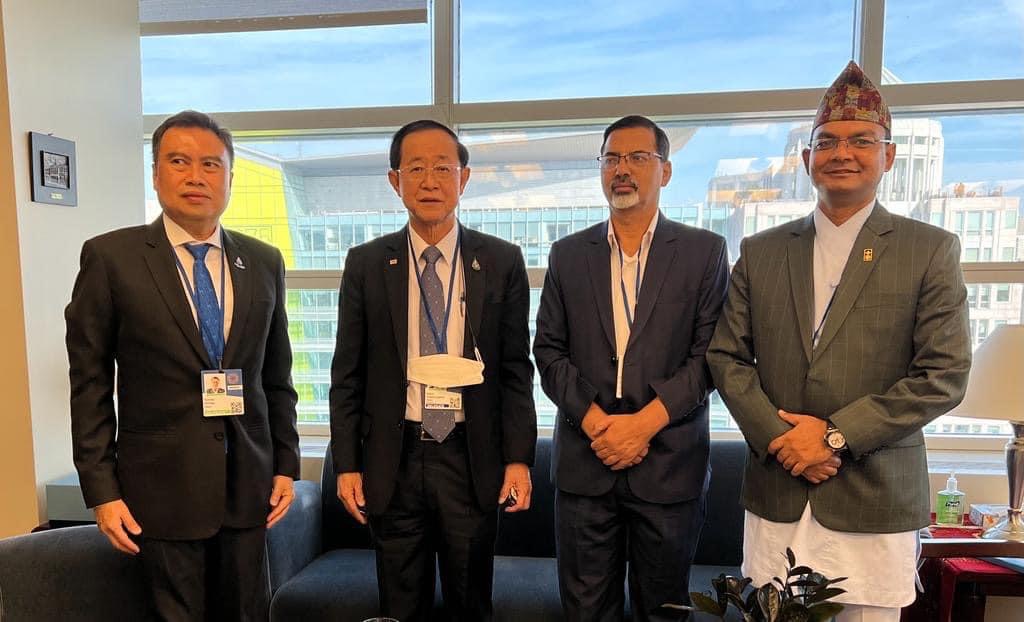 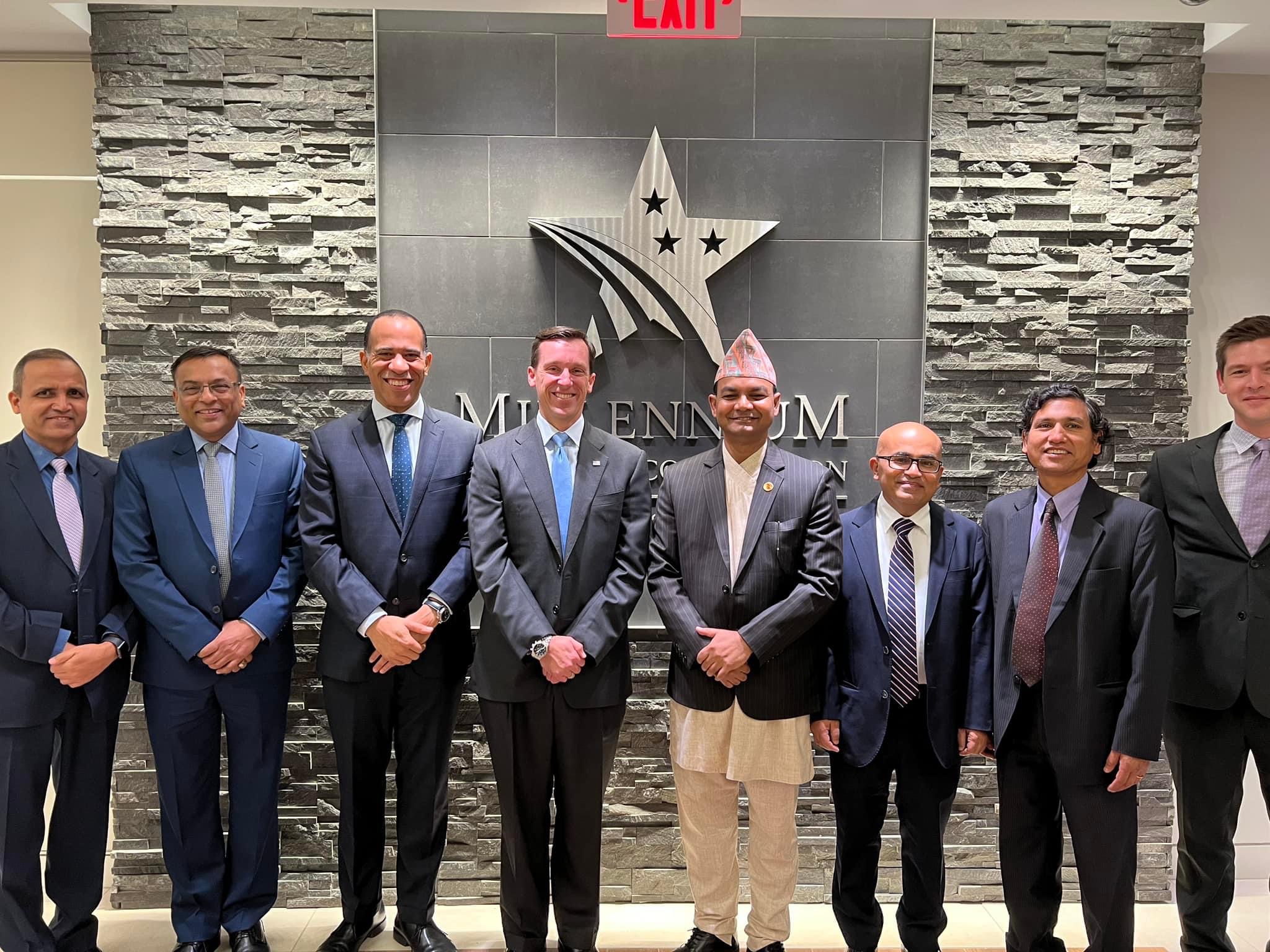 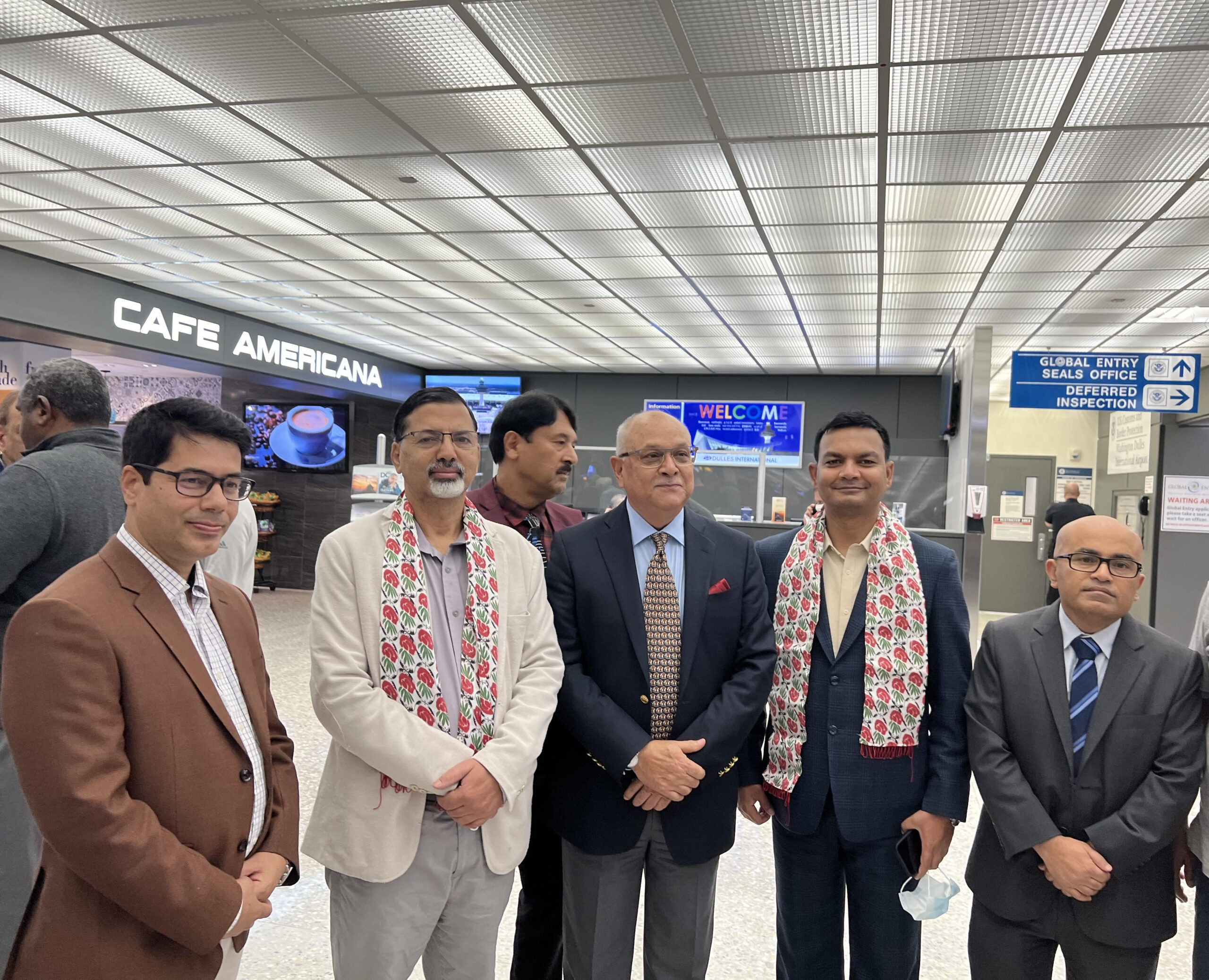