Ambassador Sridhar Khatri arrived in Washington D.C. on March 12, 2022 to assume his post as Ambassador Extraordinary and Plenipotentiary of Nepal to the United States of America, and presented his credentials to President Biden on April 19, 2022. 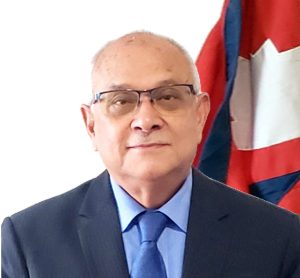 Ambassador Extraordinary and Plenipotentiary of Nepal to the United States of America, H.E. Sridhar Khatri

Ambassador Khatri was the Coordinator of the High-Level Task force on Reorienting Nepal’s Foreign Policy in a Rapidly Changing World from 2017 to 2018. He was the Member of the SAARC Advisory Committee established by the Government of Nepal in preparation for the Eleventh SAARC Summit in Kathmandu, 2001. He also served as the Advisor to the Nepali Delegation to the 11th SAARC Summit, January 2002. He was the Member of the SAARC-NGO Election Observation Group to the 1997 National Assembly Election in Pakistan and was the Member of the High-Level Task Force on Restructuring the Ministry of Foreign Affairs of Nepal in 1996. He was also the Co-Convener of the Coalition for Action on South Asia Cooperation (CACAS).

He was the Regional Editor of the journal Contemporary South Asia (Oxford University) from 1990-2000. Along with that, he was the Project Director of study on Political Parties and the Parliamentary Process in Nepal, during the year 1991/92. Prior to that, he was Member of the Nepali Delegation to the 27th, 28th and 29th General Session of the Afro-Asian Legal Consultative Committee (AALCC) meetings, in Singapore (March1988), Nairobi (March 1989), and Beijing (March 1990), respectively.

Having served as an Adviser to the Nepali Mission to the United Nations during the 28th Session of the UN General Assembly in 1973, Mr. Khatri also served as a Member of the Nepali Delegation to the 38th Session of the General Assembly of the United Nations in 1983. During his early career he was the Private Secretary to the Prime Minister of Nepal, Dr. Tulsi Giri from 1975 to 1977.

Ambassador Khatri has degrees from City College of New York (1970-1973), School of International Affairs, Columbia University, New York (1973-1975), and was a visiting scholar at the London School of Economics in 1989-1990.  He has taught and worked in various capacities at Tribhuvan University, Kathmandu for over 27 years, including as the Professor of Political Science.

Born in August 16, 1953 in Kathmandu, Nepal, Ambassador Khatri is married to Mrs. Sarita Khatri and has a daughter and a son. Mr. Khatri speaks fluent Nepali, English, and Hindi. He likes to play tennis, golf and squash.